From July 3-8, coral reef scientists, marine biologists, reef managers from all over the world met in Bremen, Germany, for the 15th International Coral Reef Symposium (ICRS2022).
The conference, which was actually planned for 2020, had to be postponed twice or only held virtually, respectively, due to a nasty little virus. But in 2022 the ICRS could finally be held “in-person”, but also online (i.e. “hybrid”) at the Bremen Exhibition & Conference Center with more than 1100 participants from 80 countries.
The reef scientists who had traveled to the event – or who had joined virtually – presented their latest research results on 15 different topics. We also presented our experiences and results in reef monitoring in the form of a poster presentation: “13 years Reef Check Reef Monitoring at Red Sea Diving Safari, Egypt“. 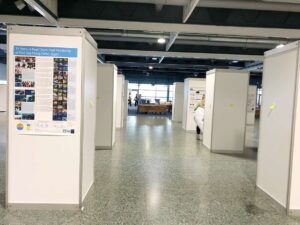 END_OF_DOCUMENT_TOKEN_TO_BE_REPLACED

Many enthusiastic divers and parents ask themselves the question:“At what age can my child actually learn scuba diving?“Possibly with the ulterior motive to take them under water someday and dive together… 🙂  Well, the answer to this question is: 8.

At the age of eight, children can get an insight into scuba diving, exclusively in the swimming pool (not in “open water”, i.e. in the lake or the sea).
The kid´s diving courses PADI Bubblemaker and Seal Team first deal with the dive equipment that we humans need as land creatures to be able to cope under water for longer than one breath.
Absolutely necessary are mask, buoyancy jacket, regulator and a scuba tank, furthermore wet suit, fins and weights.
All this has to be assembled, worn and handled under water…
At the Seal Team course, the participants also receive a manual, in which the basics of diving are explained in a clear, child-friendly way. It also includes a logbook, in which the first dives can be entered.

So, it starts in the swimming pool…

END_OF_DOCUMENT_TOKEN_TO_BE_REPLACED

On 27.8.2022 “Die Tauchprofis” (actionsport Braunschweig), Dierk and Manfred celebrated their 10th anniversary with a diversified program around diving in the outdoor pool at Hemkenrode.
In these 10 years, the owners Manfred Schmitz and Dierk Drost have constantly expanded the dive store, held countless courses, sold diving equipment and thus paved the way for many people into the underwater world.

The weather was cloudy but dry, which meant that there were only a few bathers and it was possible to dive in all pools.
Manfred and Dierk had provided plenty of food and drinks and there was a barbecue, too.
Numerous diving friends, water sports enthusiasts and followers came to Hemkenrode. Also the previous owner Rainer Hartwig (until 2012 “Tauchsport Hartwig”) was there, who still manages the revision of the regulators and other technical equipment.
Various program points had been prepared by diving instructors in the team of “Die Tauchprofis” and there were enough compressed air tanks, as well as dive equipment, so that everyone could dive:

END_OF_DOCUMENT_TOKEN_TO_BE_REPLACED

From 5th to 12th august 2021, another Reef Check course with subsequent reef surveys took place again as part of our reef monitoring program at Red Sea Diving Safari (RSDS).
Like last time we were located in Marsa Shagra again.
In 2020 the Reef Check activities unfortunately had to be cancelled due to a certain nasty little virus….
But this year there were almost no obstacles in our way (except some not worth mentioning travel formalities) and so the first course and surveys since 2019 was unstoppable !
Who could, was vaccinated and tested anyway, RSDS had implemented an appropriate hygiene concept, the entire staff had already been vaccinated in spring.

Our dynamic survey team of seven participants came from Egypt, Austria, Czech Republic and Germany, ranging in age from 10 to 64 years. Some of them had been regularly participating in the surveys for many years. Quickly they all got to know each other during the EcoDiver course and formed alternating buddy teams later on for the surveys.

The EcoDiver course pays special attention to human impacts on the reef: overfishing, mechanical damage, overfertilization, pollution and trash, as well as coral bleaching or coral diseases and also indication of possible imbalances within the ecosystem. For the four course participants, this approach was new – as recreational divers, they had previously paid their attention especially to (large) fish, or conspicuous corals and invertebrates, and not so much to “how the corals are doing”, details in the substrate cover, feeding scars, algae & sponges, fishing lines or coral damage by divers or boats. You can say the “underwater perception” changes through the course.

END_OF_DOCUMENT_TOKEN_TO_BE_REPLACED

Marine biology with all senses

After the first project day on coral reefs in November 2018 was so well received, the second project day took place on 9 March 2020 at the Lehndorf primary school in Braunschweig. This time it was again an instructive and successful day for all participants. After an introductory presentation, three stations invited the participants to get to know marine animals up close, to make microscopic examinations, to browse through illustrated books and much more.

The project day for the fourth grade was introduced by the presentation “Coral Reefs and Climate Protection” by marine biologist Stephan Moldzio. He introduced the pupils to the exciting world of coral reefs in a child-friendly manner and sensitized the young audience to one of the most important issues of the time: climate protection. A vivid poster illustrated the existential threat that global warming and ocean acidification pose to coral reefs. Afterwards the children were given the opportunity to become active themselves: In groups they went through different stations where they researched, discovered and learned with fun and enthusiasm.

Probably the most exciting station – in the truest sense of the word – was the seawater aquarium with its numerous inhabitants. The pupils marvelled at living corals, sea urchins, brittle stars, hermit crabs, algae and other sea animals. But it did not stop at observing. The animals were also taken on the hand and looked at from all sides. To touch an unknown creature, such as the brittle star with its five spiky arms, took some effort at first. I wonder if it stings? Or even bites? How does this animal behave? But all the children were brave and obviously enjoyed experiencing the interesting marine animals up close. The immediate understanding with all senses is especially important for the understanding of nature. By overcoming, approaching and close observation, fear of contact is reduced. Respect for the creatures and an interest in their way of life and their special features are developed. Understanding and enthusiasm for nature – the basis for environmental and nature conservation is created in childhood!

Another station was the book table, where children could browse through thick books and epic picture books on the subject of sea life and oceans at their leisure: Pictures of fish, corals and invertebrates from all over the world and there were exciting photos of sharks and whales to discover. After a short time the children were absorbed. Through the intuitive selection of illustrative material, it soon became clear who was enthusiastic about the colours and shapes of the corals, or who wanted to find out how dangerous sharks really are. By leafing through or reading intensively – they certainly learned something new.

At the third station, the pupils examined a wide variety of objects very closely through a microscope: In addition to coral skeletons, shells and snails, living small animals such as bristle worms, amphipods, floating shrimps and small coral fragments were also examined under the microscope. By microscopically examining dry preparations such as spiders, ants, wasps or flies, the children got to know the insects they already know from their home garden in a completely new way.

At the end of the lesson the students received a certificate of attendance. And to take home a paper bag with a booklet published for the International Year of the Reef (IYOR 2018), some sea postcards and a real piece of coral skeleton. The children will probably not forget this school day so quickly. And who knows? Maybe one or the other child has discovered a new passion on this day. You can find out more about the first project day on the topic of coral reefs here.

GREEN CORALS at fair boot at the love-your-ocean initiative, organized by Deutsche Meeresstiftung, with many interesting actors from marine conservation and science.
After successful transportation and construction of the aquarium facility, some of our most beautiful GREEN CORALS 💚 went on holiday in Düsseldorf for 10 days – as ambassadors for the worlds´ coral reefs! There was a broad variety of activities – boot4school, the Ocean Forum, presentations and workshops on the Waterpixel stage, lots of information, great insights into marine research e.g. of GEOMAR, as well as marine protection initiatives, live corals and marine animals, microscopy and experiments around the sea – here you can experience science up close!

In a short presentation “Can the coral reefs be saved?” on the Water Pixel Stage and a impulse speech at the Ocean Forum, we drew attention to the threats posed to coral reefs by the climate crisis, which are threatened by ocean warming and ocean acidification in their further existence as an ecosystem.

A poster just finished for the boat illustrates the gradual degradation of coral reefs.

END_OF_DOCUMENT_TOKEN_TO_BE_REPLACED

From 27th october to 9th november 2019, three different marine biology workshops were successfully carried out during the second MARINE BIOLOGY WEEKS event.
Our “base” was the Manta Ray Bay Resort with the restaurant ship “Mnuw” and the Yap Divers, which provided the best conditions for the workshops with its friendly and helpful staff and an excellent infrastructure.

In the course of the 3- and 2-day Marine Biology Workshops “basic” and “advanced” and the 2-day Coral Workshop we had a varied and exciting program with great diving and snorkeling trips, sampling and microscopy sessions, fish and coral identification, reef ecology and mangrove exploration.

Also on the “workshop-free” days we explored the island, with its interesting history and culture between Mens’ Houses, stone money bank and WW2 relicts, we visited the village in the district “Maap” where a traditional Yapese food was prepared for us, we searched and found numerous juvenile Napoleon wrasses inside two Blue Holes in the reef flat and on the last day we were allowed to attend the traditional Bamboo Dance in the village “Dachngar”.

For now, here some pics …

Here´s the speech of the The Scientists4Future Braunschweig, who support the claims of FridaysForFuture of a coal exit until 2030 and to achieve net zero greenhouse gas emission and 100% renewable energies until 2035:
END_OF_DOCUMENT_TOKEN_TO_BE_REPLACED